Magpie Mass Murderer in our Midst 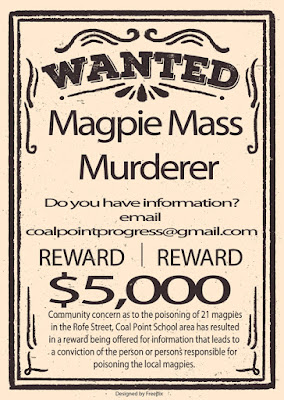 On the 9th October, 21 magpies were found on and around the perimeter of Coal Point School and Rofe Street. The EPA was advised and autopsied a bird. A Facebook post reaching 13,213 people highlighted the considerable community distress this caused.

The NSW Environment Protection Authority (EPA) is asking for the community’s help to catch a suspected bird killer after recent reports of 21 Magpie deaths at Coal Point. A local consortium is putting up a $5000 reward for information leading to a conviction.

Laboratory analysis of one of the dead birds by the EPA has shown high concentrations of pesticides including Fenamiphos and Fenthion, both of which are not readily available to the public.

The EPA has warned residents of Coal Point to keep a close eye on their pets. The EPA knows people have used food in the past to lure and kill birds. Please make sure your pets do not eat anything foreign when on their daily walks.

If you see anyone disposing of food or chemicals near open spaces such as ovals or parks, please call the 24/7 Environment Line on 131 555

It is an offence under the EPA’s legislation to use pesticides in a manner that harms non-target animals. The maximum penalties for this are $120,000 for an individual. It is also an offence to cause danger or harm to an animal by littering and maximum penalties are $3,300.
Posted by Coal Point Progress Association at 2.11.17 No comments:

Crowding out Carey Bay or a Sustainable Settlement for the future

A development application(1865/2017) for 22 dwellings at Carey Bay, behind the Carey Bay Preschool landlocked by Laycock and Amelia Streets, is on display for community consultation with comments due by 10/11/17…next week!

A similar proposal was put forward in 2013 and withdrawn. Since that time the number of trees and canopy cover has been reduced by half as Planning for Bushfire Protection, making what was a reasonable vegetation corridor less viable for permanent habitat but still useful for foraging for local wildlife.

The proposed development has taken into consideration some the issues that had been raised previously and is now proposing 11 three-storey, two 2-storey and 9 single storey dwellings.

The application states “it is a development that provides a mix of housing types that allows families and individuals requiring smaller housing to reflect their individual circumstance, to relocate within their community and remain close to family, friends and employment. This increases social and community cohesion”. 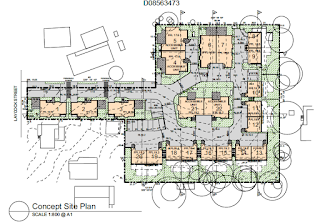 these suburbs would you live here?

A community meeting of concerned residents identified the following issues:

It is acknowledged that the development
It is agreed that there are unacceptable impacts on the natural environment and for this reason and others stated above these concept plans are unacceptable as a desired future for the Carey Bay community.

There is the potential for the land at Carey Bay to be inspirational living that raises the bar on sustainability and aspires to the 2050 vision that council is professing.

It is Council’s duty to ensure their vision is realised and the development application reflects that vision.

If you would like to support a better outcome please consider making a submission on DA1865/2017 in the next week to LMCC, Box 1906, HRMC NSW 2310, council@lakemac.nsw.gov.au. There is a letter available on the CPPA website, or use the Chronicle content above, the due date is 10/11/17, next Friday.

The Progress Association’s blog has been building since 2009, an extension of the Coal Point Chronicle which has been circulating throughout the community since 1980. This online space provides a starting point for community communication and collaboration.